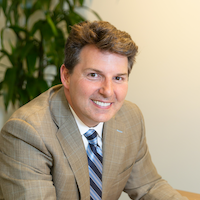 Jerry is an attorney with 20+ years experience in real estate, corporate and insurance work. While starting in private practice specializing in real estate, Jerry moved to an in-house counsel position for a public homebuilder in the mid-2000s. Jerry worked on real estate acquisions and dispositions and led a $430M workout, a $35M collection from insurance carriers, and a $20M reconstruction project.

Jerry has also worked as General Counsel for a Lloyd’s based insurance company and for the largest Arizona for-profit hospice, additionally serving as its Chief Financial Officer. Jerry received his B.B.A. from the University of Texas at Austin and J.D. & M.B.A. from Arizona State University.

Jerry has been married for over 20 years, and together they have four wonderful children.